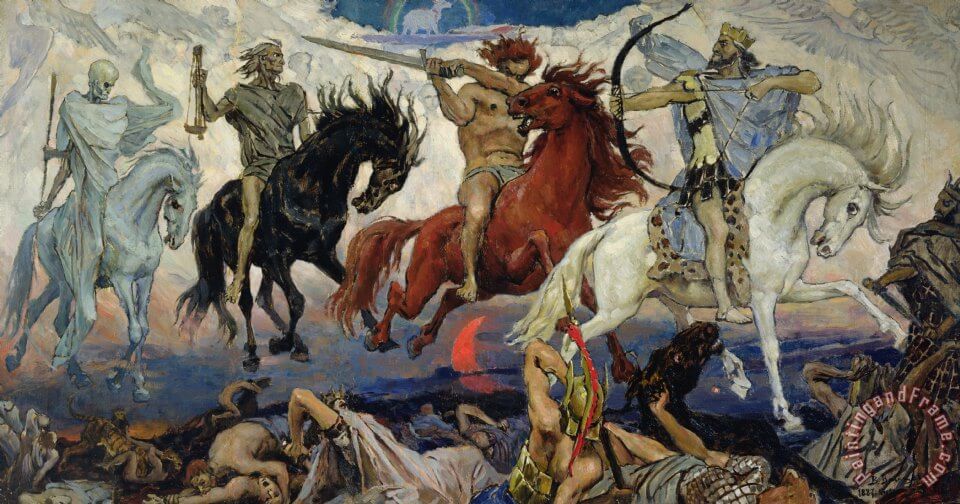 Note: I am not saying “thus says the Lord” here I am only bringing out patterns that I believe are in the Bible and History. This topic is still being worked out and refined.

There are a lot of different views in the body of Christ about the end times (eschatology). The purpose of this article is to bring us into the unity of mind concerning the 4 main “conflicting” views about eschatology and raise our personal Bible reading to a new level.

Reading this article will enable you to discern the times more accurately, read the Bible in a very exciting way and deepen your walk with the Lord in an engaging manner.

The Book of Revelation is Written by Design in Layers

The reason there is sometimes division concerning eschatological discussions is the lack of knowledge. I believe Revelation is written in layers. John (the writer of Revelation) clearly says in Revelation 1:1 that the book of Revelation is a Revelation of Jesus Christ… the one who WAS, who IS and who IS TO COME (Revelation 1:4). (3 layers 1. Past, 2. Present, 3. Future).

John wrote this letter to the churches specific to that generation. But because it is written in layers it is a timeless prophetic book that is relevant from generation to generation, just like the throne of David. Psalm 89:4

Ideas Dividing The Church Into Camps Of Thought

Notice how our eschatological division is divided by the 3 inseparable truths of time ( past, present, and future)?

All 4 views compliment each other. Jesus is the same yesterday, today and the ages to come (Hebrews 13:8).

The Preterist, Historicist, Futurist, and Idealist Views Are Synergistically Layered

Each View Is True in Some Ways But Cannot Stand Alone

The great news here is, that everyone in each camp is right to a certain extent. But when we separate these 4 viewpoints and pin them against each other it forms  “group think”.

You may be thinking; “I don’t let my eschatological views get between me and my church family.” That sounds nice, but that is not true. The apathetic attitude and lack of motivation to get on the same page about the truth is exactly what the enemy wants.

“The Preterist, Historicist and Futurist view speaks of Jesus in the Past, Present and Future and the Idealist view is the glue that brings them all together.”

How Each View Is Correct:

The Man Of Lawlessness Revealed

One day in Israel, the antichrist will take his seat in the temple of God and proclaim to be God. Over 2,000 years ago John said it is the “last hour” and the antichrist is coming and many antichrists have already come (1 John 2:18).

Clearly, the Bible teaches this truth is in our past. In fact, this happened in the past in the physical temple when Antiochus Epiphanies sacrificed pigs to Zeus in the temple. This event was called the abomination of desolation. But because our bodies are temples and there will be a temple built in Israel again; this truth is simultaneously in our present and our future.

If you read (2 Thessalonians 2:1-17) you will learn about the man of lawlessness (antichrist) who will exalt himself above all things that are worshiped and take his seat in the temple of God proclaiming to be God.

This happened in the past in the physical temple when Antiochus Epiphanies sacrificed pigs to Zues in the temple. This event was called the abomination of desolation. This happened before Jesus was born. And Jesus said it would happen again in His day and that it was near when His disciples saw the armies surrounding Jerusalem.

But what’s even more exciting, convicting, and personally relevant today is the fact that our bodies are the temple of God and in our sin, we sometimes take our seat as “God” in that temple.

John says that sin is lawlessness (1 John 3:4). We have all sinned and fallen short of the glory of God. If we took the sermon on the mount seriously we would clearly see that we take our seat in the temple as God when we sin and hold unjust judgments against one another. We go against God’s law and make ourselves out to be God when we do our own thing. If you say you have no sin, you are a liar (1 John 1:8).

Remember though, where sin abounds grace superabounds (Romans 5:20). Look at Peter, He rebuked Jesus when He was speaking of His own crucifixion. Jesus then said “…get behind me Satan…” (Matthew 16:23). Clearly, at that moment Peter’s temple was working for Satan and the man of sin. But obviously, He was forgiven and is now seen as one of the best disciples ever! Talk about great grace and glory. The same applies to us.

In John 2:19 Jesus said if anyone would destroy this temple He would raise it again in 3 days. The Bible is written in layers the word temple refers to our individual bodies, the collective body of Christ (1 Corinthians 12:12), and the temple that is to be built in Israel in the future.

Sign Of The End: The Destruction of The Temple

In Mark 13 Jesus says that one of the signs of the end will be the destruction of the temple. This prophecy was fulfilled in the past (70 A.D). It has also been fulfilled millions of times during the last 2,000 years because millions of people have died (temples destroyed) every day. Meaning many of God’s temples are destroyed in the present. And the temple that will be built in Israel will also be destroyed in the future.

The temple in Jesus’ day, the temple of Israel’s future, and the temple of our bodies follow the same patterns that are laid out in the Bible in the form of layers through historical events, symbolic language, and prophetic events in the future. They do not contradict one another, they complement each other.

But Jesus is the God of Resurrection where all men will resurrect from the dead and we will worship Him forever in new bodies and a new temple.

Son Of Man Coming In The “Clouds”

Mark 13 talks about the signs of the end times. Mark 13:26 says the Son of Man will be seen in the clouds with great glory. In the final generation of humanity, we will literally see Jesus coming in the physical clouds.

Many people have experienced Jesus coming to them in the spiritual clouds of their personal life, judging the man of lawlessness who took seat in the temple of God (their body). This is how we get saved and sanctified and is how we get fresh revelations of Jesus. The fear of the Lord is the beginning of wisdom.

Because the Bible is literal, metaphoric, symbolic, physical, and spiritual we can see that there are many layers and meanings we can draw from Jesus’s and the apostle’s words. The Bible is not open to private interpretation (2 Peter 1:20). The Bible can certainly be interpreted by the Bible though.

Names have meaning in the Bible. For instance, Jerusalem is a city in Israel. But if you look up the meaning of the word Jerusalem it means ‘teaching of peace’. What this means is there is a physical meaning to Jerusalem, spiritual meaning of Jerusalem.

The same goes for Babylon. It was an ancient civilization but is used as a metaphor for an adulteress woman and in the Hebrew means “confusion by mixing”. The fall of Babylon happened a long time ago in the past. The lifestyle and life of many adulteress women fall every day in the present and modern-day Babylon will be destroyed in the future.